Discover the town of Rajhrad

Although with its three thousand inhabitants Rajhrad belongs to smaller towns, its long history can beat many towns much bigger than this. Archaeological findings prove that Rajhrad was permanently inhabited as early as five thousand years ago. However, the important role of the settlement was yet to come. It finally came after the arrival of the Slavs, which started around 500 AD. In the 8th or 9th century one of the most important fortified settlements in Great Moravia was built here but the castle declined with the fall of the empire, too weak to resist regular Hungarian invasions, in the early 10th century. In 1045, after the expulsion of the Poles and Hungarians, duke Bretislav I gave the Benedictine monastery in Brevnov the cella of Peter and Paul which was a part of the Rajhrad castle. Three years later a Benedictine monastery was born here which would alter become a spiritual, cultural and economic centre for long centuries.

In order to be able to earn its living, the monastery received also the village of Rajhrad which had developed thanks to the privilege granted by Premysl in 1234 that turned it into a market village. In 1339 Rajhrad was mentioned as a town for the first time. In 1554 the Brevnov Abbot Jan Chotovsky and the Rajhrad monastery confirmed the status of Rajhrad, permitted it to use a seal and devolved the criminal authority, given to the monastery by Jan Lucembursky in 1327, to the town.

It was after the Czechoslovakia was established that the extraordinary expansion of Rajhrad started. Two new quarters, Matlaska and Ostruvek, rose and between 1924 and 1929 the convent of the Consolatory Sisters of the Jesus’ Divine Heart was built. After the communists took power both monasteries were confiscated by the people’s army. The original owners returned to the respective buildings as late as in 1989, after another turn of events. On October 27, 2000 Rajhrad was promoted a town.

Rajhrad is currently a smaller administrative and cultural centre with several important super-regional institutions among which there is the Benedictine Abbey, the Museum of Literature, the District Archive of the Brno-venkov District, the Congregation of the Consolatory Sisters of the Jesus’ Divine Heart and the St. Joseph’s Hospice. The town grows very fast and over the time has become one of the favourite leisure-time destinations south of Brno. 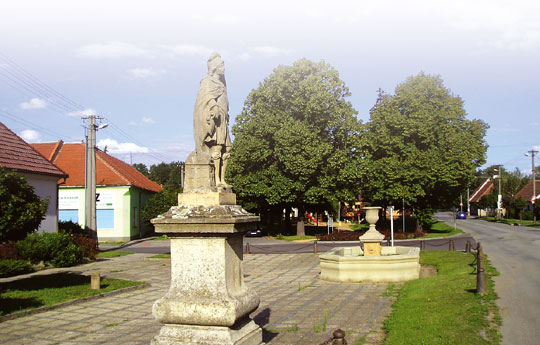 Server made by a basic